This month’s Parent of the Month is Tania Asensi from Valencia, mother of a 4-year-old and the brains behind the bilingual project  “English4families” aimed at helping parents in Madrid and Spain create a bilingual environment at home from day one.

Hi Tania – tell us a bit about yourself

I studied engineering at university but realized early on that my true vocation was teaching. Therefore I changed track and trained as a Cambridge University English teacher. I’ve been a member of the Cambridge English Teachers group for 8 years and teach English at an academy, within businesses and at schools as well as writing teaching material. Three years ago I launched English4Families to help those families that want to increase bilingualism at home. I am a mother of a four-year-old and I started talking to him in English before he was born. 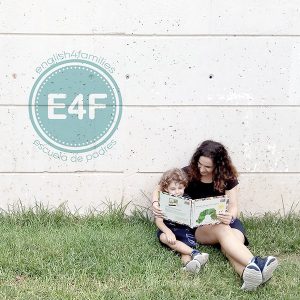 Did you speak English to him in the womb?

That’s right! I was sure that I was going to talk English to him from the very beginning and whilst learning about early-age bilingualism and language acquisition I thought I would put my knowledge to practice.

Do you still speak to him in English all the time?

My husband and I have opted for using Minority Language at Home. Regarding our methodology, my husband always speaks to our son in Spanish whereas until he was two years old I spoke to him in English (following the OPOL method). However, when our son turned two I felt it was time to change methodologies and I started using the minority language at home. We continue doing this except for when we are in a fully English-speaking environment where it is natural for us all to use English or when the two of us are on our own in the park or running errands. English isn’t exclusively for home but neither is it the only language I speak to him. I know he has acquired the second language. When you study different methodologies you realize they can be adapted for your personal circumstances and we are very happy with the path we have chosen.

You mentioned you were sure you were going to talk English to him from the very start. Why?

In Spain, despite a changing mentality, English is still considered to be a subject to learn at school. I wanted my son to pick up English naturally much earlier than school age. I wanted him to feel English was as much his language as Spanish and that it is a way of communicating with others as well as being part of a comprehensive culture.

Have you had any problems speaking to him in English?

I know that it can be tiring to speak English all of the time and that a lack of vocabulary can cause problems. However, I don’t see these as difficulties but rather as something to aim for because vocabulary can be learned along the way and everyone’s level of English can always be improved. 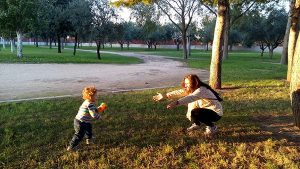 What activities in English do you usually do?

Ever since I began English4families my son has come along to the workshops and taken part in them alongside the other children.

We sometimes go to storytelling or theatre in English but we don’t class these activities as being “afterschool English” as such because they are simply fun things to do in family that happen to be in English.

Does your son go to a bilingual school?

We knew that living in Spain it would be important for our son to realize the “value” of speaking English on a daily basis. We wanted him to realize he could use English outside of the home and with other people, which is why we have opted to send him to a school with a high level of English input so that he can use the language naturally with his classmates and teachers to communicate and carry out different activities. 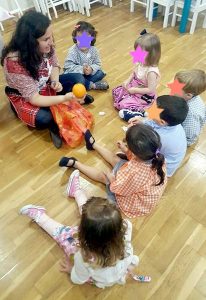 Do you have any advice for couples that are thinking of bringing up their children bilingually?

The first thing I would say is to start as soon as possible. However, if they make this decision, later on, they must never force their children to speak English when they don’t want to. If the child is 3 years old and is aware of the language being spoken all around him or her then he or she may not feel comfortable answering in English in front of all his or her friends in the park. You have to be flexible with the use of English in order not to make them want to reject it altogether.

Something else I’d like to point out is that there are easier methodologies to follow than one which expects 100% English immersion. These methods allow your baby to be exposed to English and learn it without being solely surrounded by English speaking parents. It is important not to give up. However, it is also important to be realistic, be coherent and choose the right methodology for your family.

Is your son learning another language?

Although we don’t speak Valencian at home, we have Friends and family members whose mother tongue is Valencian. Therefore our son is picking up this language as well through social contact and he is probably going to end up being trilingual.

Have you ever been criticized for talking English to your son?

On the contrary, it is turning out to be a very positive experience on all levels.

Thank you, Tania! We will take note of your advice.

If you would like to know more about babies learning the language from the womb, click here.