New to Madrid in May and wondering why locals are parading around the city centre in costume in the spring sunshine and dancing a slow polka dance called the chotis in couples on street corners? Let Kids in Madrid explain what San Isidro is all about and why your children will have fun joining in.

From 10th to 15th of May Madrileños put on their costumes and welcome newcomers and tourists to join them in the celebrations in honour of Madrid’s patron saint, San Isidro. This medieval saint, who was born and spent his whole life in rural Madrid, is said to have carried out many miracles, including being able to find springs of fresh water. Over this five day period long queues of families holding empty bottles, some dressed as chulapos and chulapas, form at the fountain next to Saint Isidore’s shrine to drink the saint’s water. To read more about the life of Saint Isidore the Farmer click here for a children’s version.

As fellow blogger Noah Wanebo from Naked Madrid eloquently points out, much of the fun for adults during the San Isidro festival is about drinking during the day at one of the sprawling picnics in the city’s parks. Families, tourists and teenagers mingle in these jolly outdoor spaces, with those with young children usually gravitating towards the fun fairs.

Don’t miss the Big Heads and Giants parades, the first of which starts at 6pm on the 10th of May from calle de la Sal and ends at 8pm in the Plaza de la Villa. Watch how the Giants move gracefully through the narrowest streets of the city centre whilst the Big-Heads interact playfully with the young children in the crowd. These giants come out again on Saturday 11th of May at 12pm in the Plaza de la Villa for a circular route up calle Mayor, along calle Bailen, past the palace and back to calle Mayor ending outside the central town hall (calle Mayor 72).  They can next be seen on Wednesday 15th of May at 10.30am in the Vistillas area of Madrid as part of the show laid on every year by the association of local folklore groups of Madrid. Their final appearance is on the saint’s day itself, 15th of May, from 10am onwards where they begin their parade on the Paseo Quince de Mayo and end at the Ermita del Santo. This parade is particularly popular as thousands of red carnations are handed out to onlookers by locals dressed in traditional outfits.

Several improvised stages pop up around the city to host open-air concerts of all types of music which are very popular and free of charge. 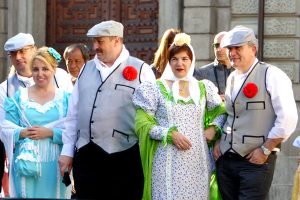 On May 10, 11 and 12, from 11 am, there will be a special San Isidro Music & dealers that will give way, on the 15th, to San Isidro Kids, consisting of workshops and concerts in which the children will be the protagonists. It will be spread throughout the whole day, from morning to eight in the afternoon. 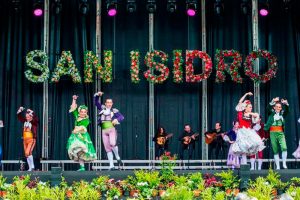 As the city fills with up with street artists, musicians and shows of all varieties, families could easily forget that the place to visit with their small children on one of the 5 days of official festivities is the Pradera de San Isidro. As well as being one of the official venues for open air concerts and entertainment, this park offers the best fun fair you will find in Madrid this May. There are plenty of rides, plenty of stalls and plenty of fairground attractions for all ages from noon until midnight. Enjoy!

The activities will begin on May 11, with two passes at 12:00 and 13:30 with the Proyecto Voltaire “Música de mobiliario” of the Lapso Company. A staging with circus dyes and cabareteros for a family audience from 9 years. On the same day at 5:30 p.m. and 6:30 p.m., Pavel Šmíd presents A class on time, for a family audience (from 4 years old). With several levels of reading, for girls and boys, and for adults, it will immerse the audience in a magical universe.

On May 12th at 12:00 and 1:30 p.m. Kayto el Mago arrives with Alokayto, an explosive mixture of magic and humor aimed at children from 3 years old. At 5:30 pm it will be the turn of the Cía. Zarzuguiñol, Zarzuela for Children with Cervantes has a dream, a funny story that mixes lyrical singers and live piano with nice puppets for children from 3 years.

The puppet designer and manipulator Alex Mihailovski presents on May 14 at 5:00 pm and 6:30 pm, Mr. Barti, a work for all audiences about a puppet that sleeps inside a piano and loves the stage. The main stage will take place on May 14 at 6:00 p.m., El Rock & Roll también es cosa de niños, a didactic and entertaining show about the birth and evolution of rock and roll.

On May 15 in two passes at 12:00 and 4:00 pm, you can see Piensa en Wilbur by the hand of Víctor Ortíz. A show about a clown with acrobat skills creating impossible situations that will leave the public impressed. At 6:30 p.m., the main stage will host the musical group 2 Princeses Barbudes with the show Siempre vacaciones. Music with a family scent accompanied with toy instruments.

In the Fiestas de San Isidro 2019 there will be plenty of time for gastronomy with the distribution of paella and cocido madrileño for anyone wishing to taste two of the most famous and tasty dishes of Spanish cuisine.

Next to the small fountain of the Clover of the Prairie of San Isidro will be placed separate stands in which rations will be served for free. A moment to gather strength in order to continue with the rest of the activities of the extensive program this year.

It will be held on May 14 and 15 and first, at 1:00 p.m., there will be a gigantic puchero with the second most famous dish of the Madrid diet: cocido. And the number one is covered by the well-known squid sandwich. The cocido madrileño is a stew of chickpeas to which other ingredients such as various vegetables, meats and pork bacon are added.

For its part, at 2:00 pm, it will be the turn for lovers of paella, a recipe based on rice, and origin in the Valencian Community, which today is very popular throughout Spain, besides being in high demand by foreign visitors.

and finally….KIM loves the fireworks!

Although at the rather unfamily-friendly hour of 22:30h the San Isidro fireworks are a must for young children. Held on 14th and 15th of May in Parque Pichikids these are quite simply spectacular. A rival pyrotechnical display at midnight on Wednesday 15th of May can be seen at the football ground of Pichikids (next to Parque de San Isidro) free of charge and thus marks the end of the five-day festivities.